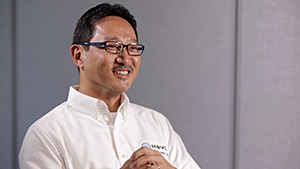 Aug 31, 2016 – MOUNTAIN VIEW, Calif.
Even though Naoki “Nick” Sugimoto studied automotive engineering at the University of Tokyo, he never planned to work in the automotive industry. Now, Sugimoto, who joined Honda in 2005, serves as a liaison between the technology and automotive industries and is the newest Honda associate featured in the What Makes a Honda is Who Makes a Honda video series.

“A lot of change is happening in the technology and automotive industries, and going forward it is more important now than ever for Honda to work with innovators of all types to remain competitive,” said Sugimoto.

A dealmaker at heart, Sugimoto was an entrepreneur who has led a series of technology venture companies in the U.S. and Japan prior to joining Honda, including a website he describes as a combination between Yelp and Craigslist for Japanese speakers.

According to Sugimoto, while the connected car experience took a big step forward with the introduction of Android AutoTM and Apple CarPlayTM to Honda vehicles including the 2016 Accord and Civic, it is only the beginning. “Your experience in the car is going to be very, very different in the future,” he said.

Through Sugimoto’s leadership, Honda played a key role in founding the Open Automotive Alliance (OAA), a group of automakers and technology companies committed to bringing the Android platform to cars.

For years before joining the company, Sugimoto says he admired Honda from afar, and even named his son after company founder. Now, Sugimoto says he hopes to host as many Honda associates as possible at HSVL in the future, so Honda associates can carry the banner of high technology innovation beyond Silicon Valley and into Honda R&D divisions in the U.S. and around the world.

In his spare time, Sugimoto enjoys sailing in the San Francisco Bay.

The What Makes a Honda is Who Makes a Honda video series focuses on Honda’s commitment to The Power of Dreams, a global theme that encourages Honda associates to conceive ideas that will create new value for customers and society and show determination to bring those dreams to life. In addition, the video series spotlights the varied careers within Honda and the inspiring efforts of Honda associates.

About Honda
Honda seeks to be a company that society wants to exist, creating products and technologies that improve the lives of people. Honda is also committed to making positive contributions to the communities where it does business, to socially responsible business practices, and to the promotion of diversity and inclusion in its workforce.

Honda began building automobiles in America in Marysville, Ohio in 1982, and now operates 18 manufacturing plants across North America, including eight auto plants that produced more than 99 percent of the Honda and Acura automobiles the company sold in America in 2015, using domestic and globally sourced parts. Honda also operates 14 R&D facilities in the region, including a major automobile and powersports R&D center in Raymond, Ohio, a power equipment R&D center in North Carolina and three design centers in Southern Cali