TOKYO, Japan, June 14, 2021 – The Japan Aerospace Exploration Agency (JAXA) and Honda R&D Co., Ltd. (Honda) today announced the plan to begin a joint feasibility study on a “circulative renewable energy system” in space, which is designed to supply oxygen, hydrogen, and electricity for human outposts and rovers. JAXA and Honda have been conducting a joint research on this system to create an environment in space where people can stay and conduct activities over an extended period of time.

In addition to water and food, people need oxygen, as well as hydrogen for fuel and electricity for various activities for life in space. One of the solutions to obtain them in space without resupply from Earth is creating a circulative renewable energy system, which combines a high differential pressure water electrolysis system that produces oxygen and hydrogen using solar energy to electrolyze water and a fuel cell system that generates electricity and water from oxygen and hydrogen.

Based on this concept, in November 2020, JAXA and Honda signed a three-fiscal year joint research agreement (through JFY 2022) to pursue research on the circulative renewable energy system for use on Lunar Orbital Platform-Gateway (Gateway) and on the surface of the Moon, utilizing Honda’s high differential pressure water electrolysis and fuel cell technologies.

In this joint research, while JAXA has been developing the study conditions according to the  scenarios and requirements for missions related to the production of oxygen on the Gateway and the supply of electricity to rovers on the lunar surface based on the past investigations, Honda has been conducting technological studies to realize the missions and scenarios set by JAXA.

During the current fiscal year (JFY 2021), JAXA and Honda, utilizing the prototypes, will start the feasibility study addressing the issues on component technologies of the circulative renewable energy system identified by the research conducted during the last fiscal year. JAXA and Honda are planning to reflect the results of this year’s study on the viability evaluation of the whole system in the next fiscal year (JFY 2022). 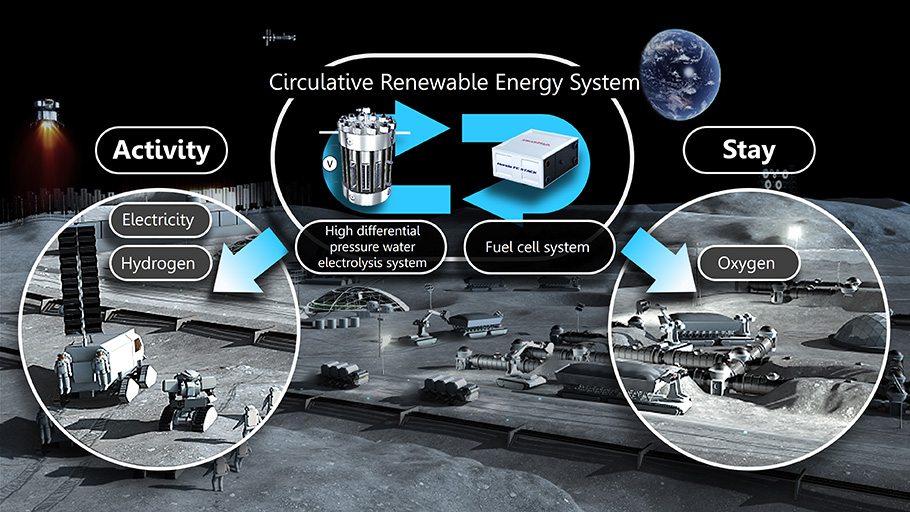 ■Comments by JAXA and Honda executives:

・SASAKI Hiroshi, JAXA Vice President and Director General for Human Spaceflight Technology Directorate:
“Based on the Japanese Government’s decision to participate in the Artemis program, JAXA has been working on mission development and system studies for realizing full-fledged lunar exploration. Oxygen, hydrogen, and electricity are essential to human activities in space. Realizing a circulative renewable energy system will enable us to obtain these requirements in space without relying on resupply from Earth. This is expected to dramatically expand our activities in space. We would like to make steady progress in this study by leveraging the respective strengths of Honda and JAXA.”

・TAKEISHI Ikuo, Chief Operating Officer, Innovative Research Excellence, Power Unit & Energy, Honda R&D Co., Ltd.:
“Honda is striving to realize an enjoyable and sustainable society and to serve people worldwide with the joy of expanding their life’s potential, on the ground, in the ocean, in the skies and in space. Through this joint research we are taking on a challenge to utilize technologies we have amassed to date and expand the sphere of human habitation into outer space, which will expand human potential. Moreover, since the circulative renewable energy system will contribute significantly to carbon neutrality on Earth, we will refine our technologies in the ultimate environment of outer space and then feed our achievements back to Earth.”

■About the Circulative Renewable Energy System:

The circulative renewable energy system combines a high differential pressure water electrolysis system and a fuel cell system, and is designed for continuous production of oxygen, hydrogen and electricity from solar energy and water.

The high differential pressure water electrolysis system created by Honda does not require a compressor to compress hydrogen, making it compact and lightweight, and contributes to the reduction of payload capacity and mass, which is a major challenge in space transportation.

Honda has been working on the research and development of hydrogen technologies for many years. In 2002, Honda became the first company in the world to start lease sales of fuel cell vehicles. Moreover, Honda has been developing and installing smart hydrogen stations using its high differential pressure water electrolysis systems. Jointly with JAXA, Honda will strive to realize a circulative renewable energy system by utilizing hydrogen technologies Honda has amassed to date. 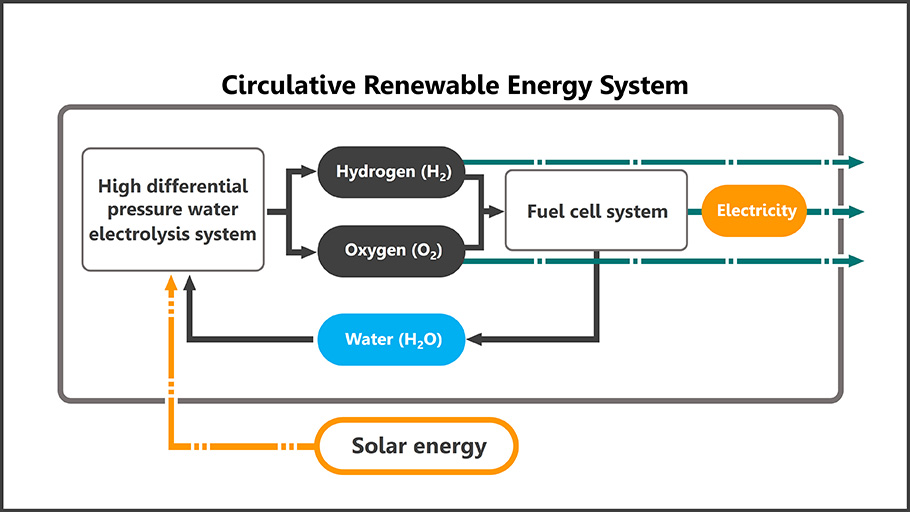 Expanding human activities to the Moon and then to Mars requires sustainable and feasible space exploration plans. In the early 2000s, the U.S. and our other international partners began discussing human space exploration plans. In 2018, the 2nd International Space Exploration Forum (ISEF2)*1 hosted by the Ministry of Education, Culture, Sports, Science and Technology (MEXT) of Japan and attended by representatives of more than 40 countries and organizations, confirmed that explorations of the Moon, Mars, and the rest of the solar system are widely shared goals and, therefore, sustainable exploration is the key.

In accordance with this government policy, JAXA has been conducting research and development with the aim of 1) providing technologies and equipment in which Japan excels to the Lunar Orbital Platform-Gateway (Gateway) which will be built with an eye on exploration of Mars and beyond and 2) resupplying the Gateway using an all-new cargo resupply spacecraft (HTV-X based on H-II Transfer Vehicle (HTV) for the International Space Station resupply).

On the lunar surface, JAXA intends to contribute to the establishment of the foundation for sustainable lunar exploration with the Smart Lander for Investigating Moon (SLIM) that aims to demonstrate a pin-point landing technique (scheduled for JFY2022) and the lunar polar exploration mission for exploring the distribution of water in the lunar polar region (scheduled for JFY2023). Additionally, JAXA is conducting research on a pressurized crewed rover as a means of transportation to support lunar surface exploration in the late 2020s and beyond. 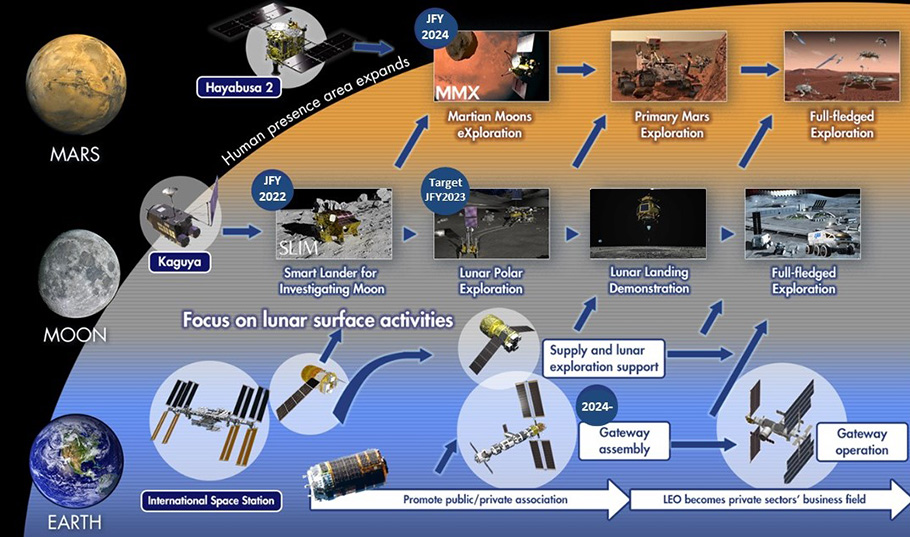